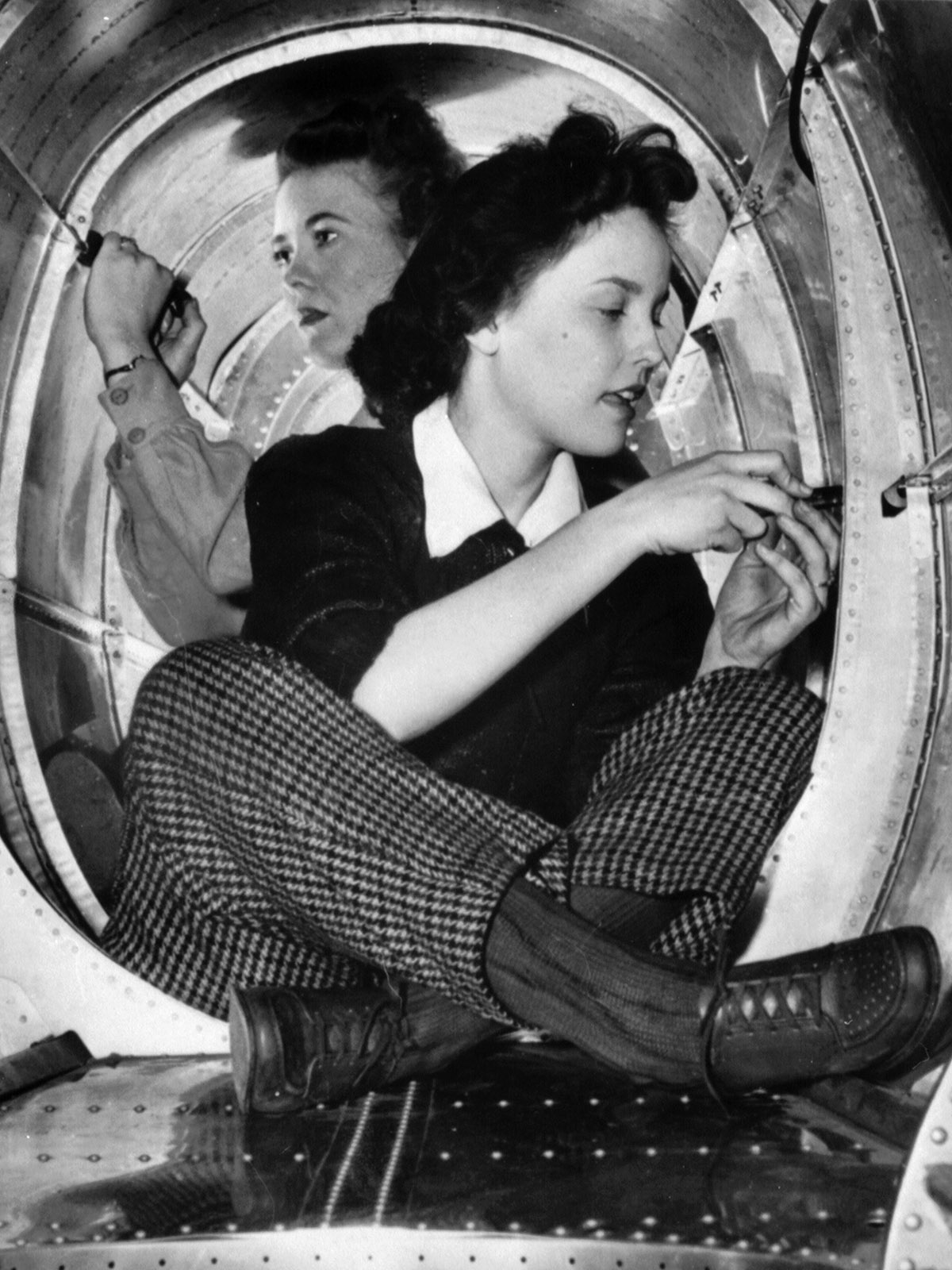 Mae (Eckley) Graybill was a real Rosie the Riveter. As a young woman she worked as a riveter on the B-26 Marauder medium bomber at the Glenn L. Martin plant outside Baltimore, Maryland. She even appeared on a WITF show about the history of her adopted hometown, Camp Hill, as one of the town’s war heroes. 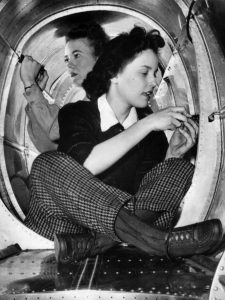 Mae was just 18 years old and a year out of high school when she went to work for Martin. Her older brother, James, was the first to work there, and before the war ended, her younger sister Catherine became a riveter for the company, too.

Mae, Catherine, and their contemporaries broke the barrier between what was considered men’s work and women’s work and proved there was no job they couldn’t handle. But that wasn’t why they went to work at home-front factories. They were doing their part for the war effort, and doing it very, very well.

With the war’s end came layoffs for Mae and many other Rosies, but the skill she’d demonstrated earned her a call-back, and she returned to Martin to work on the Martin 202 airliner. That stint ended in 1948 when she married a former army technical sergeant who was a pioneer in another area of endeavor, field x-ray.

I worked at the Mifflin Garment Factory, in Juniata County, because that’s all there was for women if you didn’t further your education. They made pajamas, and I put the binding around the collar and down the front.

My brother James wrote me a letter and said, “Mae, why don’t you come down? They’re hiring women.” He was one of six honor students who were picked from the Milton S. Hershey School—the Hershey Industrial School then—to go down to Baltimore and work in a machine shop at Glen L. Martin.

I went to the factory where I worked, and I said to my friend Hazel Huss, “I got a letter from my brother at Glenn L. Martin’s, and he told me they were hiring women and he thought I should come down. She said “Let’s go, Mae.” And I said, “Well, where would we stay?” She said she had two brothers who lived in Aero Acres, next to the factory. They lived on Fuselage Avenue. That’s the part of the plane that we ended up working on, so I thought that was clever. She said the one brother had children and the other one didn’t. We could stay with the one without children. They had two bedrooms. We got ready and went down, and we went to live with her brother and his wife, Winey and Ruth Huss. I’d never been out of the state before. We both went to the plant and were hired, but we weren’t hired in the same section.

We got 97 cents an hour. It was $1.07 for the night shift. It was an eight-hour day, and we were paid every Friday, cash in a brown envelope.

The first day was mostly talk. It was more or less taking us around and describing and telling us what the department did. They described everything we had to do and where we had to go to get our tools. We didn’t know when we went in what we needed. They told us that we’d each have to have our own toolbox.

There were lots of women, but my partner, Margie Moore, and I were the first women to work in that section. We had our own toolboxes, just like the men. The smaller tools we had to get ourselves. We both went shopping and bought the smaller tools. But the larger tools, like the snake drill, we had to check out of the tool crib. The snake drill was long, almost like a tube, but it wasn’t firm. You could hold it and push the button, and it would drill a hole. You had to hold the very end of it while you were using it because it was flexible, and it could fly around and maybe catch in your hair. We used the snake drill to drill the harder places down in the corners.

We worked on the B-26 Marauder. Margie and I built the last section of the fuselage before the tail went on. We were with a group of men, but she was my riveting partner. Margie was my partner the whole time I was there, except they did pull me off of the B-26 fuselage section to go up and do a section on the Mars flying boat, and that was with a man as a partner.   We set our frames into a fixture. The frames were metal, predrilled. The fixture was made of wood, shaped like a half moon. There were two fixtures, one for each side. You couldn’t build one whole section at once. We had rolls of sheet metal, “skin,” they called it. We had a table that we would flatten it out on, and then we cut it to the size that we needed. There was a marking on the table for the section that we had to cut. After it was cut off of this big roll, we had box files that we used on the edges. It had to be nice and smooth. That’s when the supervisor would look at it and say it was okay. Not only us women; everybody’s work had to be inspected. That was the last inspection before we would take it up to the fixture.

Every step had to be inspected by our boss. We usually had to wear leather gloves until we got it assembled to the point that we could drill it because the metal edges were sharp, but once we were finished with cutting it and getting it to the fixture to rivet it, of course you couldn’t use gloves when you used the rivet gun. We’d hold it, each end, and drill the holes to hold it in place and then go back to the inside and drill out the holes in the skin. The frames already had the drill holes in them. It took two people because the one on the outside had to hold it while the one on the inside drilled it. We had the little tool called a Cleco tool that you would press, and the tool would put a temporary clamp in the drill holes every here and there to hold things in place until we riveted. The holes had to be perfect. Margie was shorter, so she was on the inside of the curve and I was on the outside with the rivet gun.

After we riveted they had the rivet inspector come. We very seldom had to have a rivet taken out. When it was inspected and passed, somebody with a big crane would come and take it to the assembly line. There they’d make a whole circle of the two halves.

We had to wear slacks or coveralls, our own clothes. If your hair was long you had to have it tied up or covered with a turban. If you had that snake drill in one hand, and if it would ever get loose, you could lose all your hair. But if your hair was short—I had short hair—you didn’t have to have anything on it.

Aero Acres was supposed to be one of the first planned communities built next to a plant during the war, for workers. The houses were small. They were row houses. Glenn L. Martin was just across Martin Boulevard—two plants, One and Two—and it’s still there. They built a theater and a drug store and a grocery and everything you would need at one end, and there were homes at the other end. We were so close we could walk to work. We had an underpass we could use. It was in Middle River, east of Baltimore. And, of course, everybody was from somewhere else—most of them anyway.

Nobody had cars, so if we wanted to go to Baltimore city, even to the Hippodrome Theater, we had to take a trolley. They had nice shows at the Hippodrome. They even had stars that were famous people there. You could go get a sundae. Most of the drugstores had soda fountains then. We could take the trolley to Bayshore Park to go swimming or to Baltimore city to shop.

Sometimes we would go out on dates. The air force was stationed back of Glenn L. Martin’s plant, and a group of them would tour the plant every day, and they could stop and watch us work, but they weren’t allowed to talk to us. One day three soldiers came to Aero Acres, and one man walked up to me and said, “Did I see you today in the pen?” So I said, “I was there, so you may have.” We talked and he had two years in law school when he was drafted. We dated and he took me up to the Hippodrome a couple times, and he took me to a really nice restaurant, but we had to go by trolley. That’s the only way we could get there. But then he was shipped out.

When the war ended I was at home—we lived in Dundalk, a residential area on the southeast edge of Baltimore, then—when we got the news. I don’t remember how we found it out, maybe on the radio, but everybody knew it. Everybody was out on their porch or the sidewalk, clapping and dancing. The man next door was bringing some kind of drink out to celebrate. It was a big celebration.

After the war, we were laid off. We went out of there in lines like we went in when we were hired. We got unemployment compensation. They had to get the plant ready to go commercial.

I wasn’t disappointed. I was happy the war was over. I went to work at Fort Holabird, an army facility in Dundalk, doing mustering-out pay. I quit there when they called me back to work at Martin’s. I worked on the electrical panel for the 202, a postwar airliner, and quit in ’48 when I was married. My husband used to say, “Mae, you must have been a good worker or they wouldn’t have called you back after the war, because there were a lot of men that could have taken that job.”

(This article was adapted from an interview Judy Sopronyi did for America in World War II magazine.)