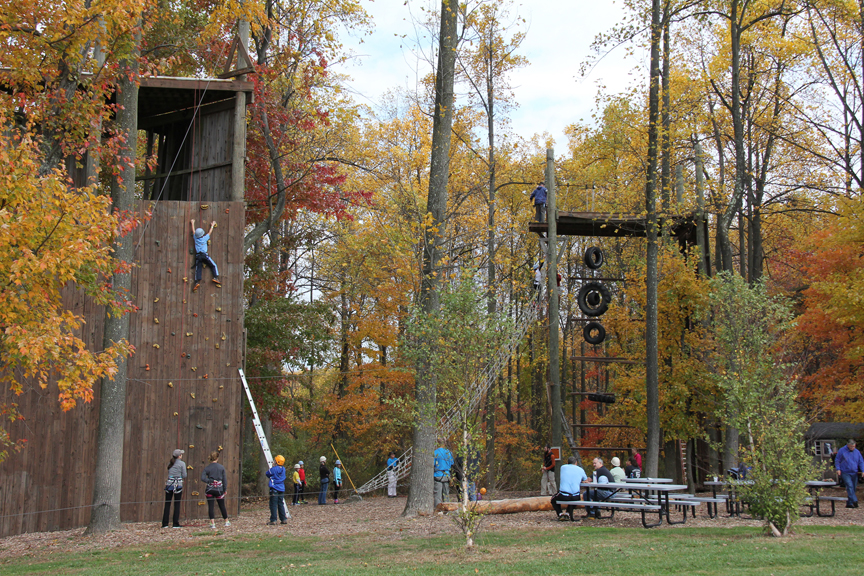 The original name of the Lewisberry ski area used to make perfect sense, but that was before Roundtop became a four-season destination. Each spring, even as pockets of snow still cling to the slopes, Roundtop begins to transform itself into a place for warm-weather fun. Visitors will soon be rolling down a hill in water-filled OGO Balls, soaring 40 feet above the ground on the zip lines of the Vertical Trek, facing the challenges of the ropes course, or pitting themselves against others in paintball games. Kids will come to Roundtop for the summer Adventure Camps that combine various activities. And all of this will happen without the need for a single flake of snow.

“Winter’s still our bread and butter,” says Chris Dudding, Roundtop’s marketing director, but clearly things have changed since the days when Roundtop shut down once skiing ended. “Basically we just closed the doors and said, ‘See you in October.’”

Dudding, who lives in Dillsburg, had worked at Roundtop as a ski instructor before pulling up stakes and heading west. He was working at California’s Mammoth Mountain when his old employers tracked him down with a job offer. “I still don’t know how they found me,” he says, but he jumped at the opportunity. (Roundtop, founded in 1964 by Irving S. Naylor—still its owner—is part of Snow Time, Inc., of York, which also owns and operates Liberty Mountain Resort and Whitetail Resort.)

Dudding was back at Roundtop when the resort began to branch out from winter sports back in 1995. It started with paintball, the mock-combat game where players shoot each other with blobs of color. Things started slowly, admits Dudding, until management discovered the key to success—birthdays. “We went to Jubilee Day in Mechanicsburg, set up a booth, and said, ‘Hey, this is a great place for birthday parties,’ and the thing just blew up,” Dudding relates. Today the paintball facility, which sits off in the woods beside the top parking lot, actually remains in operation year round. Participants can wield their weapons on a number of different fields, including the original D-Day field, a wild west town, and a wooden fort.

The next step in Roundtop’s evolution was the ropes course, which opened in 2004. Intended as something corporations could use for team building exercises, the series of climbing and balancing challenges soon became popular with local schools that used it for their students, and student athletes. “We have a lot of school districts where they bring the whole sixth grade or the whole eighth grade for team building to get them into their new school, that kind of thing,” says Dudding. Although companies do use the ropes course, Dudding estimates that about 75% of its business comes from high schools and colleges. “It’s completely different from what we expected, but it’s still working well.”

The year 2009, Dudding says, was when things really took off. That’s when Roundtop introduced Mountain Adventures, a summer program where kids of various ages could take advantage of the resort’s numerous offerings. Depending on the program, campers might use the Vertical Trek with its zip lines, Tarzan swings, canopies and bridges; the OGO Balls; the Cedar Maze, the bumper boats, and all the various climbing structures. “The Camps just sort of tie it all together,” says Dudding. “Not only does it bring kids here to try all the stuff, but once they’ve been here they want to come back with their families.” It’s certainly a healthy alternative to video games.

If there’s a star of the Adventure camps, it’s the OGO Balls. Imagine a combination of an oversized hamster ball and a water slide—with the water slide inside the ball. Riders climb into a central, water-filled chamber inside the big plastic balls, and then slip and slide as the balls roll downhill. Aside from Roundtop, only two other places in the United States are licensed to use them—one in Tennessee and one in Massachusetts, Roundtop has six of the balls for regular use, and a couple of extras. The most popular ones are the water-filled H2OGO Balls, the ones with the water. Those with stronger stomachs can try an IGO Ball, in which the riders are strapped in and rotate along with the ball—even if it means hanging upside down. “It’s the kind of thing where people do it once and go, ‘I’m glad I did

it but I don’t need to do it again,’” Dudding admits.

The success of Mountain Adventures sparked the creation of week-long Adventure Camps, which now attract about 1,000 kids a season. “That all came about because we were thinking, ‘We have all these buildings sitting empty, we have paintball and the ropes course and Mountain Adventures and the Vertical Trek and we’ve got all this great stuff to do–wouldn’t this make a great summer camp?’” Dudding says. Roundtop offered its first camps over two weeks in 2009. This year it will have seven weeks of camps for kids from 8 to 17.

Overnight camps started up about three years ago, with the ski school rooms converted into bunkhouses, and the day-care nursery into a game room. Dudding says the overnights draw people from further away, such as Washington and Philadelphia. There were even a couple of kids from Sweden last year.

The 2015 summer season opens on May 23 and will close the first weekend in September, except for the Vertical Trek, which will remain open until November. “The zip lines work really well in the fall because of the leaves changing, and it’s cooler out, and we found it actually stays popular right through the fall, “says Dudding. While the summer operations don’t match the scale of the ski season—there are around 250 summer employees versus the 1,000 or so who work winters—it’s definitely a change from the days when business stopped at the end of ski season. “I can remember pulling in here in July and it’s a ghost town,” Dudding says of the old days of Ski Roundtop. “Now you pull in and there are people all over the place. It’s fun.”