The Pennsylvania Garden Expo provides a respite from the winter blues.

Hang in there! Spring is coming!

One sign of winter’s impending departure is the arrival of the Pennsylvania Garden Expo, which will take place February 27-March 1 at the Farm Show complex in Harrisburg. The Expo’s arrival is especially welcome for garden enthusiasts who have been pining for the warm outdoors. Not only can they shop for gardening supplies from the many vendors who attend the show, they can also stroll through the elaborate display gardens and get a glimpse of what awaits them on the other side of winter.

“It’s a really welcome sign for gardeners that spring is around the corner,” says George Weigel, the long-time garden columnist for the Harrisburg Patriot News and Pennlive.com. “Plus you get to go inside, it’s warm, there are flowers actually blooming, you can smell grass and mulch again, and it’s almost like you’ve fast forwarded your way into spring when you really needed it the most.”

This harbinger of spring almost didn’t happen this year. The show’s previous operators, Journal Multimedia, decided the Expo wasn’t a great fit for their businesses, and decided to end it after last year’s outing. It appeared the Expo had reached the end of the line, and then the National Association of the Remodeling Industry stepped in to take over. NARI started a Central Pennsylvania chapter about 18 months ago, and when some members received word about the Garden Expo’s cancellation, they realized it offered a great opportunity for the organization. “We had participated in the show in the past and had great success, and knew it was a good show,” says Aaron Gross, who serves on the NARI board. “Our goal is to try to put on a show as close to last year’s as possible.” The big challenge was to achieve that with only about four months to prepare. Gross says getting exhibitors to return was relatively easy. Getting landscapers back was a little more difficult, because it requires months of pre-planning to prepare one of the expo’s elaborate display gardens. (As of this writing, four landscapers have signed up build the gardens.) “These landscapers, or hardscapers, put in a lot of time, effort and money into creating these nice, large, 2000-2,500-square foot feature gardens,” says Gross.

The show will occupy three rooms at the Farm Show Complex. One new feature this year will be an actual wine garden, with 10 Pennsylvania wineries set up in an actual garden setting. There will also be two stages—a “do-it-yourself” stage and a presentation stage. Weigel will be one of the speakers, with four talks scheduled over the weekend, including one called “Gardening in Pennsylvania is Not for Wimps.” It ties into his new book, Pennsylvania Getting Started Garden Guide. “Some of it’s going to be about the weather and the bugs and all the crazy stuff you have to deal with around here,” says Weigel, who will discuss what he calls his “plant all-star team,” 20 varieties that provide a good backbone for Pennsylvania gardening. 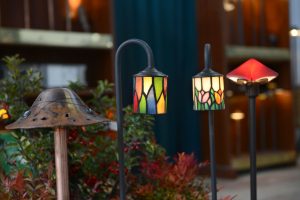 Weigel has been involved with the Pennsylvania Garden Expo since its very beginnings, when Dennis Burd, then-owner of Country Market, and Terry Bush, whose company had done marketing for the Eastern Sports and Outdoor Show, put on the first expo back in 2003. Weigel was working for Country Market at the time, and for the first few shows he even helped assemble some of the display gardens. He’s talked at every show since its inception. He sees the expo as a great “idea show,” where people can receive inspiration for things they would like to do in their own yards.

Much of that inspiration comes from the expo’s centerpiece—the display gardens. Up to 2,500 square feet in size, these gardens will temporarily transplant a bit of the great outdoors into the Farm Show’s Northwest Hall. Joe Levendusky of Levendusky Landscape, a family business in Wellsville, has been designing gardens for the expo since it began, and he will have a new one ready for the 2015 show. It’s a huge task. Levendusky estimates a 50 x 50 display garden uses more than 100 tons of material. “You create an outdoor living area and try to incorporate all elements of what a complete landscape project would be for outdoor enjoyment in your back yard,” he says. That could include patios, fireplaces, waterfalls, fountains, pergolas, retaining walls, and, of course, live plants. “You’re trying to show what you can do,” says Levendusky, who sees his job as educating the public and getting word out about his business.

Levendusky begins physical preparation around Thanksgiving. Many of the plants have to be put into greenhouses and “tricked” into blooming at the end of February. That process starts in December. “Usually the plants we use are an early spring bloom,” says Levendusky, because there’s not enough time to get summer plants to cooperate with the timetable. “The idea is to get as many different, interesting plants as you can in that setting with the hardscape.” He estimates a completed garden might have a thousand plants, plus shrubs, evergreens, and trees. The set up begins on the Monday before the show’s Friday opening and requires four 12 to 14-hour days of hard work. The process starts with a base of crushed limestone called stone dust. That might weigh 60 tons. A thick layer of mulch (up to an entire tractor-trailer load) provides the beds for the plants. Boulders and rocks for water features might tip the scales at another 20 tons. Bricks, pavers, and walls could add another 20. The material for a decorative border around the whole thing could weight an additional 10 tons. Elements such as fireplaces and pergolas might mean another 10 tons. “It’s an investment for anybody involved, but it shows the public what really could be done. And then they’re seeing it, feeling it, walking on it and speaking to the people that built it.”

Yes, spring is really on the way. The Philadelphia flower show opens a day after the Pennsylvania Garden Expo begins, and York’s show comes a week later. “For me, when those garden shows start, that’s it,” says Weigel. “You go to the shows and then you’re into March.” 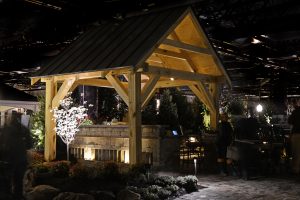